John Stamos
Jean Hamm is a supporting character on the ABC sitcom, Galavant. Sir Jean Hamm is a knight who shares a past history with the protagonist Gary Galavant. They both compete in a jousting competition in which Galavant has more at stake than just winning the prize. Sean Hamm first appeared in the episode "Pilot". He is portrayed by actor John Stamos.

Jean Hamm is contemporary and rival of Galavant. While he doesn't seem to be as famous, he appears to be just as skilled. The two share an unexplained past history which has created their current competitive and antagonistic relationship. Hamm has a penchant for making "Your mama" jokes which Galavant finds extremely annoying. He also takes great joy in taunting Galavant over his recent romantic troubles.

Jean Hamm was set to compete in a jousting competition when he spotted his old rival Galavant attempting to sign up for the contest as well. Hamm teased Galavant by calling his companion Princess Isabella Maria Lucia Elisabetta his "beard". His mocking continued after he learned Galavant couldn't afford the jousting entry fee. This prompted Galavant's squire Sid to offer up Isabella's Jewel of Valencia as payment. Jean taunted Galavant by suckering him into a "Your mama" joke before his first match was to start. He then made eyes at Isabella but she ignored his advances and instead convinced a jousting official to get Galavant a bye directly into the finals. Hamm didn't complain as he was confidant in his own abilities and unworried about Galavant believing him to be less of the hero he once was. Jean easily made his way through the competition to the last match where he was set to face Galavant. Before the match he was inside his tent eating dinner when he was paid a visit by Isabella. She started to flirt with him and offered him a drink of absinthe. Unbeknownst to Hamm it contained a substance which wound up making him violently ill. When the time came for him to compete he stumbled out of his tent and began vomiting. However, Galavant was also in bad shape too having over trained with Isabella. The joust commenced very slowly due to the impaired competitors and when their lances finally struck both contestants were knocked off their horses. As Hamm and Galavant remained unmoving on the ground a tournament official declared that the first one to their feet would win. Both men struggled to rise and Jean nearly won until Galavant was inspired by Isabella to stand up first. After losing the competition Jean fell back down and groaned in pain ("Joust Friends").

The name "Jean Hamm" is a reference to "Mad Men" star John Hamm.

In "A New Season aka Suck It Cancellation Bear", Jean makes a cameo appearance and is hinted to be a closeted homosexual, or bisexual. 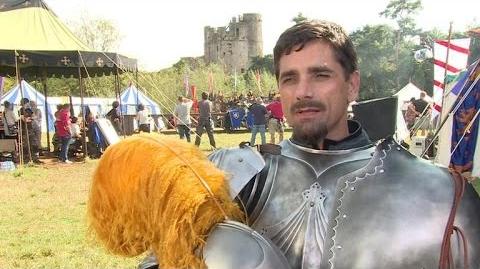